Medicago sativa is the Latin name for “the Queen of Forages”, alfalfa, the most popular and important forage legume grown in Canada. (Agriculture Canada, 1987) It owes its monarchic nickname to its many virtues and merits. Alberta Alfalfa Hay is considered to be one of the most palatable and nutritious of hays. Rich in protein, vitamins and minerals, alfalfa hay is one of the chief components of dairy cattle feed, as well as serving as an important dietary ration for milking goats, beef cattle, sheep and horses. Aside from the nutritional advantages that it provides for ruminants and a variety of equine species, alfalfa is also an indirect source for honey as bees gather a substantial amount of nectar from alfalfa flowers. (Alfalfa)  This high-yielding cultivar also has a great ability to improve soil quality and provide weed control for ensuing crops.

The plant itself is a bushy perennial legume which grows to a height of 60-100 cm. Its leaves consist of 3 leaflets which can range in shape from almost round to lanceolate. The stems are slender and may be either hollow or solid. Flowers grow in clusters of 10-20 and the florets are usually blue or purple, white or yellow, occasionally bronze and green and may be variegated with shades of blue and green. (Goplen, 1987) Seed pods are slightly downy and vary from kidney or sickle shaped to single, double or triple-coiled in appearance; however “the sickle pod has been almost eliminated by selection because it contains few seeds and shatters easily”. (Goplen et al., 1987, p.6)

The roots of the alfalfa plant are of four types: tap, branch, rhizomatious and creeping. The majority of roots probably penetrate most soils to a depth of about 2 m. (Fulkerson) Taproots typically penetrate “from 7 to 9 m, but roots have been observed 39 m deep in a mine beneath an alfalfa field”. (Sheaffer & Evers, 2007, p. 182) “Depending on the length of the growing season and maturity at harvest, alfalfa will have from 2 to 10 regrowth cycles”. (Sheaffer & Evers, 2007, p.182) in the air. It does this through an especially unique symbiotic relationship with a particular type of soil bacteria. These bacteria produce nodules on the root that convert nitrogen in the air into a form that is readily used by the plant- a process called “nitrogen fixation”. Soil acidity directly affects the growth and survival of these bacteria and can be a significant impediment to high alfalfa yields. Saline soil conditions also deter productivity because salinity adversely affects seed germination and also prevents roots from taking in water and essential nutrients.

At Barr-Ag, we take up to three cuts of the early maturing varieties of Alberta Alfalfa Hay from our irrigated farms. This alfalfa is sought after for its higher protein content. The later maturing variety is grown on our dryland properties and we harvest up to two cuts. All of our alfalfa hay is non-GMO.(See to the attached article: USDA to OK Genetically Modified Alfalfa ) Over the past four decades, the Canadian Alfalfa processing industry has experienced tremendous growth. Today, it ranks as one of the top five largest exporters of Alfalfa in the world. Alberta-grown Alfalfa hay offers many benefits and advantages when compared to hay grown in other parts of the world. Canadian Alfalfa hay provides farmers with a consistently higher quality product, while also offering a more rapid harvesting time than many other types of hay.

Because of its high protein content, farmers across Canada and the United States use dehydrated Alfalfa hay as food for their livestock. The soil on the eastern slopes of the Canadian Rockies is rich in calcium and magnesium, which helps to produce a more robust, nutrient rich hay. during the shorter growing season. Dry land alfalfa hay may be harvested up to twice per season, while irrigated alfalfa hay can be harvested up to three times each season. Because of it has a deep perennial root system, Alfalfa hay is a high water use forage crop. Although it optimally requires 540 to 680 mm of water per growing season in Alberta, the crop is relatively drought tolerant.

The long Canadian winters allow farmers to grow Alfalfa hay using more natural methods. This significantly reduces the need for pesticides and herbicides, as the cold temperatures effectively discourage pests and most weeds. The shorter growing season allows the land a greater resting period to recuperate. This recovery time helps eliminate the need for artificial fertilizers to coax more production, as is commonly necessary in areas with warmer climates.

This non-GMO crop also offers more stringent quality control guidelines. Instead of being graded by observation and smell the way Timothy hay is, Alfalfa hay is tested and graded by independent labs. Canadian Alfalfa hay promises a more consistent product, year after year.

Barr-Ag is a family-owned operation with a farm-to-farm business model. This allows them the unique ability to maintain much tighter control over the product they export. Barr-Ag’s farms and producers are strategically positioned near the eastern slopes of the Canadian Rocky Mountains where they are fortunate to have clean air, long warm days with cool nights, soil rich in calcium and magnesium and a pristine environment in which to grow their non-GMO alfalfa hay.

Growing 60% of all exported hay ensures that they can set high standards in place at each stage of their product, from planting to packaging. The remaining 40% of their stock is purchased from local growers with the same dedication to quality. Barr-Ag’s quality standards allow them to guarantee mold-free hay with less than 12% moisture content.

Contact Barr Ag to get more information on any or our crops including Alfalfa, Timothy, Mixed Hay, Canadian Grains and Pulse corps. 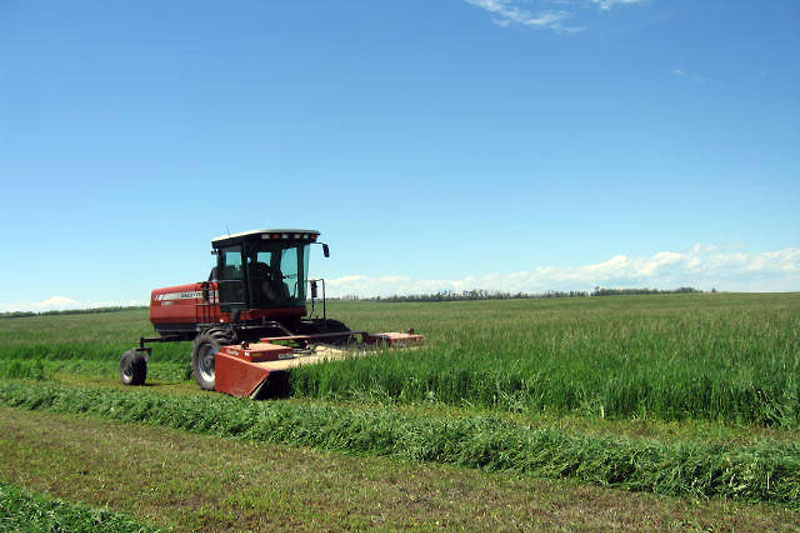 Timothy hay grows extremely well in Western Canada’s growing conditions. The clean air, rich soil and cooperative climate all contribute to the production of some of the most palatable hay in the world. Since this Timothy hay is grown at higher altitudes, with long warm summer days and cool nights during the growing season, it matures with an increased sugar content and makes excellent forage for livestock.

Canadian Timothy hay and other forages are in demand in Japan and other countries along the Pacific Rim. It is used as forage for beef and dairy cattle, as well as in the horse industry in certain parts of Asia. It’s a nutritious source of fibre, encourages growth and is beneficial to livestock producers who do not have the land or the means to grow it locally. As a result, the export market for Canadian hay has expanded rapidly.

Canadian hay growers see hay processors and exporters like Barr-Ag as their consumer. They will sell their crops to a local exporter, where the Timothy hay is compressed and processed for shipment. The true customer is the export market. Canadian hay growers who want access to the export market should contact a hay processor to learn about market demands, specific standards for raw material and the preference of the international customer. .

Product quality is incredibly important when trying to sell your crops to a hay processor and exporter. Shipping products like Timothy hay such large distances is very expensive. In order to ensure the needs and expectations of the international customer are met, a hay processor must hold a high standard for the hay it chooses to purchase, process and export.

In regards to Timothy hay, the end-user is looking for long, course stems with long heads. The stems should be green, leafy and have a minimum of brown leaves. It should be free of mold, weeds, or other plant species and contaminants. It must have a low moisture content to ensure mold and moisture damage doesn’t occur during transport or storage.

Processing the crop into compressed bales can reduce shipping costs. Timothy hay can be compressed or even double compressed to better fit into transportation containers. They are usually transported by truck to a container yard, then picked up by rail and moved to a Canadian port. If the hay is going to Asia it will be moved to a port in Vancouver, shipments going to Europe travel to Montreal, and shipments going to the United States are transported via Chicago and/or Fort Lauderdale. From these ports they’re loaded on ocean container ships and sent to overseas markets. 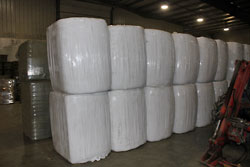 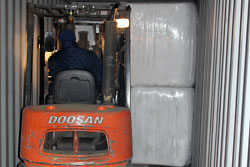 In order to ship Timothy hay to international markets the hay exporter must obtain a Phytosanitary Certificate. This is the official document issued by the plant protection organization of the exporting country to the plant protection organization of the importing country. It makes sure the product has been inspected, free of quarantine pests, and cleared according to specific regulations of the country receiving the shipment.

Some markets do not hold as strict standards as Japan. If the baled Timothy hay does not meet Japanese requirements it can be sold to residual markets such as Korea or Taiwan. A hay processor can also market single-compressed hay in the USA, Europe, the Caribbean and Middle East as they each have different requirements and may accept a variety of Canadian hay products.

For more information on selling your Canadian grown Timothy hay, contact Barr-Ag.  If you’re interested in importing Canadian forage, click on the image and fill our the request form.